The mission of the Niles-Maine District Library (NMDL) is to engage, inform, enrich, and educate its community. 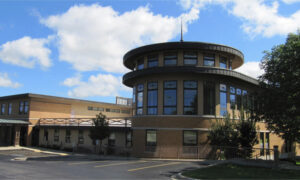 The Niles Public Library (now we are the Niles-Maine District Library) began through the work of the Woman’s Club of Niles as a room in the Village Hall in 1956, and one year later expanded to a second space in the Grennan Heights Field House.  In 1957, a referendum passed establishing the Niles Public Library District, taking in parts of Niles Township and Maine Township. Its first Board of Trustees were elected in 1959. At first, the Library was run by volunteers, with Jean Fox finally hired as the first librarian in 1959. A vacated store was chosen as the Library’s first central site, at the corner of Oakton and Waukegan, where the Library remains today.

Groundbreaking for a new Library building took place in 1965, with a grand opening on Sept 7, 1966. Over the years, the Library had branches in the Golf Mill Shopping Center, on Milwaukee Avenue, and in the former Ballard School, as well as a bookmobile to make stops in some of the outlying areas of the district. Additional renovations and expansions of the main Library building took place in 1983, 1998, and 2013. For more information on the history of the Niles Public Library, consult Niles Centennial History. Pictures from our past can be found in the Illinois Digital Archive.